One of my great pleasures towards the end of the year and today has been taking walks along the Cape Cod Canal.

There was some nice color in the eastern sky this morning before sunrise.

Was able to get it some air time, too. Always grateful to have more exposure for these images.

I wanted to capture the energy of the ocean surging beneath the serene rising moon.

You will want to keep the volume very low or even mute your device as the sound of the wind and surf is intense. I kept the sound because it was very much part of the experience.

This was the perfect last image for tonight at First Encounter Beach.

There was no shortage of spooky images at Bass Hole Sunday morning thanks to the low tide, a rolling fog, and a very busy spider. It was quite cloudy Saturday morning and I wasn’t sure what I would find when I got to the National Sea Shore. For a while it seemed I would be better off doing something else. But when I approached the entrance to Coast Guard Beach I was glad I came. 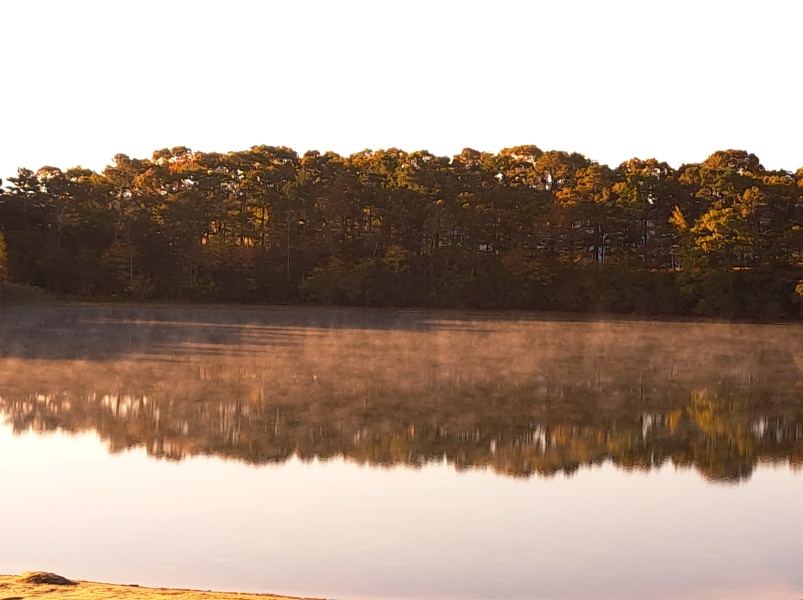 Last weekend it was crisp and cool, so much so, fog formed over the warmer water.

The image of this gentle glide over the surface of Flax Pond is particularly acute today because of the downpours from the slow moving warm front.

One morning this past week I went to Linnell Landing Beach to take some long exposure photos. It was an interesting time but could have been more adventurous.

I had heard a pack of coyotes before getting there and saw two cross the road as I approached the beach. Given the time and location, I wasn’t surprised at all. I set up my tripod in the darkness and began shooting. It was eerily quiet. I sensed a presence nearby. After the first photo appeared I learned that the tide was out. As the second and third photos processed, I observed the sound of water trickling through stones as it does in the many small tidal streams. Soon after I heard a distinctive sound of something stepping on the stones.

I turned the tripod towards the direction of those steps in hopes of capturing what I presumed was nearby coyote. I didn’t get any coyote photos but was able to get some interesting images of Cape Cod Bay.

This is a text widget, which allows you to add text or HTML to your sidebar. You can use them to display text, links, images, HTML, or a combination of these. Edit them in the Widget section of the Customizer.